A study published in Nature reports that Follicle-Stimulating Hormone (FSH) may be a key instigator of Alzheimer’s disease (AD). Treatment including gene therapy and anti-FSH antibodies reversed and prevented AD-related pathologies in mice.

Alzheimer’s disease (AD) is the 7th leading annual cause of death in the United States and is typically caused by an abnormal buildup of two proteins: amyloid and tau. Amyloid proteins help with neuron growth and repair but can destroy nerve cells later in life due to abnormal buildups referred to as plaques. Tau is intended to stabilize neurons by providing them with a  neurofibrillary structure. When unregulated, tau proteins can dysfunctionally aggregate into neurofibrillary tangles (NFTs), causing AD.

Elevated follicle-stimulating hormone (FSH) levels are often associated with menopause and, when regulated, the hormone’s intended purpose in the human body is to stimulate egg and sperm development. Both low and high levels of FSH are associated with infertility and sexual defects.

Scientists have long suspected that menopause plays a role in the pathogenesis of AD. During menopause, females have elevated levels of FSH, which—among other hormones—can lead to bone decay, weight gain, tiredness, and cognitive defects like those observed in AD patients. Women have a three-times higher rate of disease progression.

To determine if FSH is linked to the development of AD, researchers from Emory University and Icahn School of Medicine conducted an experiment in which they manipulated FSH levels in mice and then examined cognitive function and plaque formation.

In mice injected with extra FSH for three months, researchers already observed amyloid plaques and and tau NFTs, as well as inflammation and destruction of neurons—all symptoms of AD. Specifically, the damage, plaques, and NFTs occurred largely in hippocampal and cortical neurons. Further, these mice showed impaired spatial memory as demonstrated by comparatively poor performance in a water maze test. These changes were observed in both male and female mice.

The researchers then administered an antibody drug that lowers FSH levels. After treatment, they identified that the same AD symptoms identified in the FSH-supplemented mice had nearly disappeared. Their anti-FSH antibody (FSH-Ab) inhibited amyloid plaque and NFT formation while also reversing cognitive decline. As FSH-Ab inhibits all functions of FSH, the mice would also experience increased bone mass, decreased body fat, and increased energy expenditure.

The researchers believe excess FSH causes an increase in the expression of a gene that regulates an enzyme called arginine endopeptidase. This enzyme ultimately keeps amyloid and tau proteins in check, but once overproduced, clumping and tangling can begin. Experimentation revealed that either the deletion of this gene via gene therapy or FSH-Ab treatment successfully reduced amyloid plaques and tau NFTs and improved water maze performance.

While increased FSH levels in menopausal women is implied in the pathogenesis of AD, the researchers tested how male mice would respond to FSH-Ab. They found that the antibody “at the very least” prevented amyloid accumulation in the male mice.

These findings have serious implications if the findings translate to humans. FSH concentrations could be used as an assay in patients to determine pathology and treatment. Antibody and gene therapies that proved to reverse and prevent AD symptoms in mice could also be used in humans with FSH-induced AD. 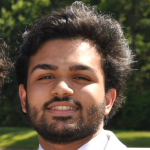 Sohum is a Public Health student at the University of Florida. He seeks to attend medical school and is interested in combatting online medical disinformation and promoting health equity.